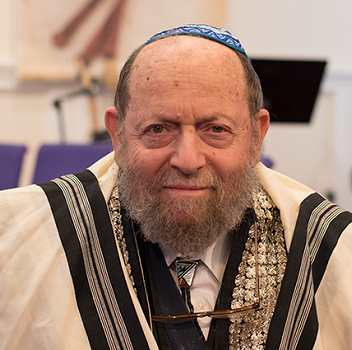 Rabbi Michael Rudolph was born in 1939 in Queens, New York City, to second generation Jewish-Russian immigrants.  He attended neighborhood public schools through 9th Grade and, after several years of Hebrew School, became Bar Mitzvah at Mishkan Israel, an Orthodox Jewish synagogue at which his grandparents were members.  In pursuit of his interest in science and mathematics, Michael commuted to Manhattan to attend Peter Stuyvesant (a science) High School, and was later admitted to the Polytechnic Institute of Brooklyn (in Borough Park), from where he graduated with a Bachelor of Science (applied mathematics) in 1961.  Regrettably, between his studies at Stuyvesant and “Poly,” both scientific and highly intellectual schools, Michael lost his belief in God.

After two years of graduate medical study at New York University School of Medicine, Michael made a career change.  He moved to the District of Columbia and enrolled in the George Washington University School of Law, from where he graduated with a J.D. degree and also passed the Virginia State Bar in 1968.

Michael began his practice of law in the fields of juvenile and criminal defense and, at the same time, enrolled in a doctoral program in psychology at the Catholic University of America.  He married his life partner Marie in 1974 and, two years into his marriage in 1976, had a powerful and supernatural visitation from the Holy Spirit that restored his former long-abandoned belief in God.  Shortly thereafter, a second visitation by the Spirit convinced him, beyond any doubt, that Yeshua was the Mashiach; and his life has not been the same since.

The experience of meeting God as he did caused Michael to make several drastic changes in his professional life.  He quit his study of psychology, adjusted his practice of law, and began to educate himself in the Scriptures – especially in Biblical Counseling – a ministry to which he felt called.  Michael’s first Messianic experience was in Beth Messiah Synagogue in Rockville Maryland.  While there, he became certified as a mohel to perform circumcisions, founded and directed Shalom Biblical Counseling Center, was ordained to eldership, and was eventually sent out to begin an affiliated work in Washington, DC that became “Ahavat Yeshua Messianic Congregation” in 1985.

Michael continued in the private practice of law in both Virginia and the District of Columbia while serving as Senior Leader of Ahavat Yeshua.  He also took classes in both ministry and theology and, in the course of time, earned a ThM from Messiah Biblical Institute & Graduate School of Theology, and a DMin, through distance study, from Trinity School of Apologetics & Theology.  As part of his service to Ahavat Yeshua, he founded the Biblical Counseling Institute, and also Messianic Life Institute, a Graduate School for Messianic Jewish distance learning.

In 2006, Michael was called out of Ahavat Yeshua to become the full-time Congregational Leader and Head Elder of Ohev Yisrael Messianic Jewish Congregation where he now serves.  He also serves as an Associate Shaliach (apostle) in Tikkun International, as a Judicial Elder in the Union of Messianic Jewish Congregations, and as an ex officio elder of Ahavat Yeshua.  In addition to his elder ordinations, Michael received Rabbinical Smicha from Tikkun America and, as an ordained Messianic Rabbi, participates in hospital and prison chaplaincies, and as a Religious Lay Leader within the United States Coast Guard Auxiliary with 25 years of service.

return to Our Staff